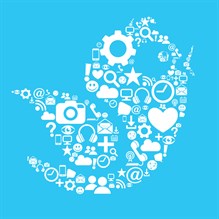 Tweeting to no one: Over half of FTSE 100 Twitter followers appear ‘fake or inactive’

Twitter, once social media's golden child, may be celebrating its 10th birthday this week, however with reports of sluggish user growth, the social network faces an uncertain future. Now, new research from digital marketing agency Greenlight casts further doubt over Twitter's user base.

In a study of the UK's largest listed businesses, Greenlight found that 92 companies in the FTSE 100 tweet. However, more than half (55%) of the users following these companies appear to be posting fake or spam messages, or haven't posted anything at all within the past six months.

The research suggests that many FTSE 100 companies may be communicating with a much smaller audience than previously thought, with some users swapping Twitter for other networks like Instagram.

Key findings from Greenlight's research include:

Andreas Pouros, COO and co-founder at Greenlight Digital, said: "As Twitter celebrates its tenth birthday, the social network's next ten years appear uncertain. Our research suggests that many users may no longer be making regular use of their accounts, while users that do tweet may be speaking to a much smaller audience than they might think. For brands and businesses, that are investing a great deal of time and money in creating content to share on Twitter or advertising to users, these findings will be eye-opening. To avoid wasting resources by talking to no one, brands and businesses must take a deeper look at where the audience is hanging out online and just how actively engaged they are. By choosing channels that have a relevant and engaged audience, brands and businesses will be able to attract and grow their customer base, as well as influence and enable consumer purchases."