But this time it is different. I imagine Larry Page sitting with the board members at Google headquarters saying"ok guys, this time we will push hard!" And they are pushing hard…

In my view, G+ does not represent a frantic attempt to develop a "social Google" but rather a natural business opportunity it couldn't avoid but pursue. The web - as a transposition of the 'real world' - has evolved towards a system of social interaction, expanding to accommodate the unavoidable need to find multiple ways of sharing experiences. As Google is at the heart of most of web users' online experience, this move looks like the natural evolution and adaptation towards a new structure. To be succesful, the only option Google has is to give G+ the highest possible visibility hence its integration with the product upon which the Google Empire sits and most defines it: Google Search.

The first step was the introduction of the +1 buttons that appeared in search results. By allowing users to become comfortable in seeing that little icon while searching the web, Google prepared the field for the landing of a new service.

Since the introduction of the social network in June 2011, its user base has been growing steadily with many people signing up but perhaps not not as many really going beyond the registration process.

Bearing in mind the new "let's push hard" mantra, Google+ is being promoted in more Google products. In fact, Google holds some of the platforms that online users spend most of their time, in order to enhance the Google Social experience at its disposal, for example YouTube, Gmail, Google Places, News, Latitude, Shopping etc, to mention a few.

In addition, a substantial PR campaign has been initiated to continue the buzz around the new social network. Some of the best examples of this are conferences with appearances from trendsetters and influencers. For example, David Beckham talking for almost two hours on  the Google stage (you can watch it here). There's also the leveraging of a powerful connection with the White House - (US President Barack Obama's Google Plus video chat 'hangout'). 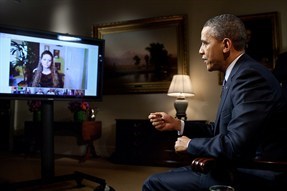 The latest "big push" came from the unmistakably big step of integrating personal social results within the search engine results pages (SERPs): Search, plus Your World. This feature, for the time being, is implemented only when you are logged into Google.com. However, if you don't have a G+ profile some users are getting a pretty clear message about what you should be doing:

This is probably the boldest move Google could make. But so far, from a Search results quality perspective,  the results aren't exactly exciting. Even if Google is advertising the new feature with some nice stories, the actual quality of the results are poor and definitely too promotional - with Google+ profiles and updates with no authority and no history resulting in page 1 for generic searches.

Most of the elements mentioned above describe aspects of individual engagement with G+. But, fundamentally, what really is important is considering how Google is promoting Google+ for businesses.

The attention  Google is attributing to G+ through the different channels outlined above is a good enough reason to register a page and link it to your website. From a business perspective, Search and Social have to be part of the same strategy and Google+ represents a central part of the way search engine optimisation (SEO) has been changing in the past few years.

I have outlined below some of the main reasons why a business should create a G+ page:

Google is prominently showing Google+ results to all its users, including those who are logged out and is predictably considering the signals coming from the social network to adapt the search algorithm for all results. In the example below it is evident how the G+ page is occupying a relevant part of the results. 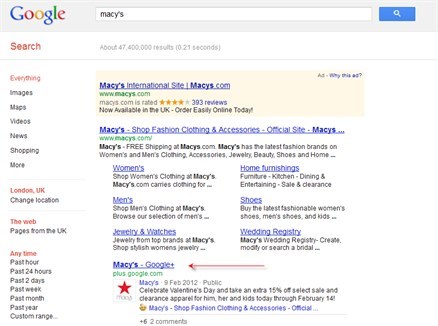 Increase interaction with your audience

Google has historically been changing the search algorithm to push up fresh and newsworthy content ( Caffeine in August 2010 and in November 2011, a new fresh content algorithm which is supposedly "impacting 35% of searches"). However, since Google stopped providing real-time search results, it missed the immediate conversations and trends when compared to Twitter and Facebook - both engaged in improving the internal search feature.

This article by Greenlight's COO Andreas Pouros, " How much of a dent could Facebook make in Google's search business" outlines the value of Search and highlights the level of trust Google can leverage in influencing the behaviour of its users. This element of trust is what could make the difference. In fact, personal recommendations on a trusted platform could be the winning mix especially towards "less expert" web users. However, pushing too hard might also lead to a new generation of "social marketing spam" that could affect Internet experience and determine the exact opposite results, with people losing trust and therefore reducing their sharing activity.

Another platform to engage with users and increase brand awareness

Some of the features available in G+ are quite unique; the concept of Circles, for example, is what makes a Google+ profile slightly different from other social media. From a business perspective it allows companies to segment audiences they want to target depending on the desired messages to be distributed and this could come in handy on multilevel social campaigns. In addition, the hangouts are an attractive tool that might develop further into a fully interactive video experience with customers as demonstrated by the president of the United States.

Drive more traffic to your site

Google+ can be considered as an additional free-earned media. It should be used as a medium to improve brand awareness but also as a way to generate additional traffic to your site by posting engaging content and pointing links back to your website. 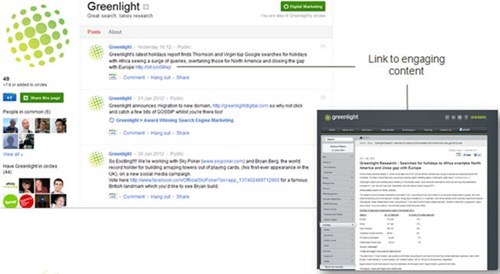 One Google product already well integrated into this social revolution attempt is Google Analytics (GA). In fact, GA can already track the interaction with every social sharing button with a modest setup but with +1,  tracking is automatic. Google will soon launch the analytics tool for G+ business pages, which will probably have a relevant impact on the way social media activity is tracked.

By pushing really hard, everybody will have to submit to the power of Google+. SEOs have already surrendered, brands will follow and ultimately, the humble user might also engage.

Is Google+ the Beginning of the End for Social Influence Services like Klout and Peer Index?

Google+introduces some fundamental shifts in the way users engage withsocial media. The best part is that...

….Google and Facebook will both be front and centre in 'social search'. So it won't be enough for sites to simply be relevant. They will also need to...