Google have announced a new update to its mobile algorithm in an effort to improve user mobile browser experiences.

From November 1st, mobile web pages that show an app install interstitial (large overlay ads that suggest you download the site's app) which hides a significant amount of page content will no longer be considered mobile-friendly.

Google's mobile-friendly testing tool and mobile usability report within Search Console have been updated to reflect the announcement, both of which now warn you if they detect large amounts of app download interstitials. 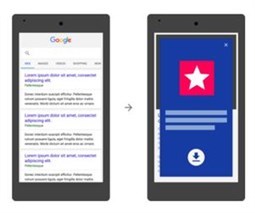 Which pages will this effect and how can I still serve app install ads?

This new ranking factor will only apply to pages included within the transition from the search result page to your site. If an install interstitial is only served later during a user's journey, your site will still be classed as mobile friendly

Google have recommended the use of app install banners (see below) instead of interstitials as these provide a consistent form of advertising which allows the user to have control of their browsing experience. App install banners are supported by Safari as Smart Banners and Chrome as Native App Install Banners, however, Google have also mentioned webmasters are able to use their own versions, so long as they do not block page content for users. 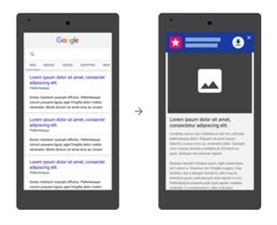 Why only target app install interstitials? Why not all ads which block content?

App install interstitials are not the only methods of advertising which interrupt mobile user browsing. Using the two mobile sites below as an example (NME and YELP), this new update will only have an effect on Yelp due to the use of an app install interstitial which blocks page content. However, the new update will not have an effect on NME, as the advert does not prompt users to download an app.

Although both of these ads block content, why should Google discriminate against other forms of mobile advertising? I also asked myself, which page do I feel deserves to be affected by Google's mobile rankings the most? Yelp, who's still aiming to serve relevant content to users, or NME, who are using ads which have no relevance to the site. 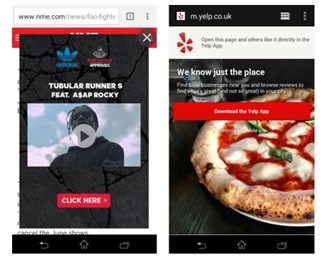 Danny Sullivan of Marketing Land challenged Google's new update, claiming that this is a problem which Google helped create from pushing apps in SERPs, and that they should target all large ads.

Google sent a statement back, saying "In the case of app install interstitials, there are easy alternatives for promoting apps. In particular, there is a commonly accepted browser standard: Smart Banners on Safari and Native App Install Banners on Chrome. We're encouraging webmasters to adhere to that accepted best practice!"