Do you ever conduct searches in another language? 76% of people search in two or more

Without thinking about this for too long, my instinct would be to assume that not many people search in more than one language. The results, however, the results from Greenlight's Search & Social Media Survey (2011-2012), suggest quite the opposite. Clearly, people's definition of 'rarely', 'often' and 'regularly' are going to vary, but in the final analysis this suggests that 76% of people search in two or more languages - a significant proportion that warrants some further investigation. To make some sense of this, I've dug a bit further into the data to find out where all these multi-lingual speakers are.

Respondents who search in multiple languages

Some of the countries that are topping this chart aren't entirely surprising - Belgium, for example, has three official languages. Others aren't so obvious. The fact that Italy and Spain top the chart with 100% of respondents claiming to search in multiple languages, despite reasonably homogenised language use, is possibly a testament to the position of English as the quasi-official language of Europe and the relative prevalence of English language web pages. I'm recollecting an infographic that Greenlight produced some time ago showing that the UK produced the most web pages per head in Europe at 17 pages per person, compared to ten per person in Spain and just six per person in Italy. Presumably as well as there being more English spam on the web, this also means there is more high quality English content to be searched for by Europeans as well.

Respondents who search in multiple languages by country

We can break the data down another way too, but this time by occupation. Here you can see that the occupations one might most readily associate with the Internet - IT and Marketing - top the list of occupations whose practitioners are most likely to search in more than one language.

Occupation of respondents who search in multiple languages 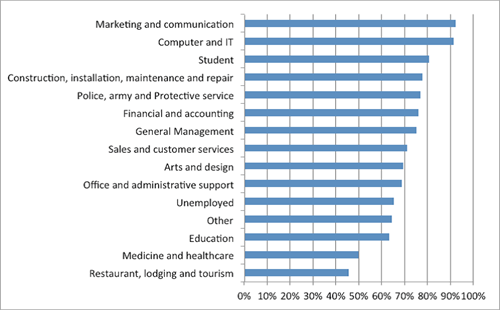 So what if English is used to search in Spain? Won't my .co.uk domain handle that eventually? Not, as it turns out, as well as a subsection of a Spanish domain written in English would. Search engines will use the domain extension to help them determine the geographical relevance of a site, so while a .co.uk domain stands an increased chance of ranking in the UK, it will count against it when people are searching in another country. Consequently, this behaviour may warrant the creation of multiple language sites for your business. This of course runs counter to traditional search engine optimisation (SEO) logic which states that duplicate content is bad - which it is - so this would have to be undertaken with some caution, ensuring that all content is properly localised so that search engines know that one version is intended for region A, the other for region B.

The real takeaway here of course is not that marketing and IT firms in Italy, Spain and Belgium should instantly start optimising their sites for multiple languages, or that hotel sites in America should give up on the prospect. Our data is robust enough to start gleaning insights into Internet use, but not enough to build a SEO strategy around. The point here is that,  proper research, beyond just gathering a few keywords from the Google AdWords Keyword Tool, really does help to inform your SEO strategy. The first step to deciding whether to progress an opportunity is to define the size of that opportunity. Hopefully this data gives you some food for thought about how to define that opportunity.